Acting on a tip from Hazen police, Dickinson Police arrested several individuals suspected of burglarizing a Hazen drug store. On August 22nd, 1964 around 4:30 a.m., a burglar alarm at the Hazen Drug Store was activated. The Highway Patrol spotted two vehicles bearing out-of-state plates leaving the scene. Each vehicle was occupied by three individuals. The Highway Patrol pursued one of the vehicles on an 18-mile chase. Two of the passengers jumped out before the vehicle stopped and were picked up by the second vehicle. The second vehicle was able to sneak past police. The driver of the first vehicle was arrested.

The Highway Patrol searched the vehicle and found a matchbook from the Home Terrace Motel in Dickinson. They also located ammunition for a handgun. A statewide broadcast was issued for agencies to be on the lookout for the second vehicle. It was quickly located at the Home Terrace Motel. Nearly a dozen officers converged on the motel later that day. They arrested five men without incident.

During a search of their belongings, officers recovered three .38 caliber pistols, three two-way radios, knives, and burglary tools. All five were charged with illegal possession of pistols and were held on bond. One of the men, Tom Smith of Tulsa, OK, had an outstanding warrant for his arrest out of Tulsa for burglary. 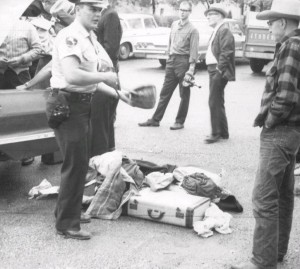 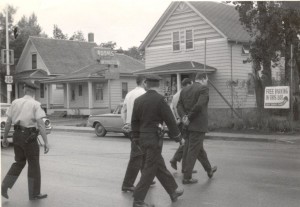 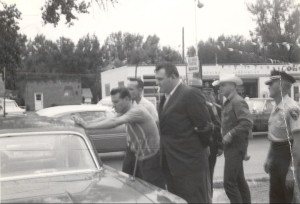