The Records Division is staffed by one Records Supervisor and two full-time Records Clerks. The division is responsible for storing, indexing and disseminating records produced by police officers in the course of their duties. All “calls for service”, or CFS, where police reports are made become part of the records system. Most reports usually contain a narrative describing the events that took place and often include the names of reporting parties, victims, suspects, arrested subjects, and witnesses. Accident reports contain vehicle information, estimated damage value, and a diagram of the crash events.

In addition to compiling incident reports, the Records Division is also responsible for submitting National Incident-Base Reporting System (NIBRS) data to the federal government for the purposes of crime data analysis. The NIBRS data is an important part of law enforcement, in that it helps identify trends and allows departments to tailor their policing to combat a certain index of crime.

Incident Reports
If a “call for service” prompted the officer to make a police report of the incident, the resulting report is available for public release. Citizens can obtain a copy of the incident report by coming to the Public Safety Center between the hours of 8:00 a.m. to 5:00 p.m. Monday-Friday. There is a small fee for obtaining a copy of the report, which you can find below. The following conditions may prevent the release of some reports or some information within the reports:

Your insurance company will generally obtain the police reports for you. If not, you may obtain a copy by coming to the Public Safety Center during normal business hours as stated above. Like incident reports, accident reports also have a small fee which you can find below. 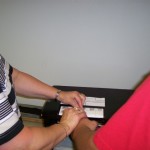 The Records Division also provides a list of other services to the public. Fingerprint cards can be processed by the division for a small fee. Effective February 2012, the department will only offer these services to residents of the City of Dickinson on Wednesdays and Fridays between the hours of 9:00 AM and 12:00 PM. All county and non-residents are directed to the Stark County Sheriff’s Department for fingerprinting services.

The division participates in the Landlord Program, which provides background checks on prospective renters to various housing agencies. Criminal warrants and sex offender registration are also processed through the Records Division.

In 2016, North Dakota voters amended the state constitution to enhance the rights of victims of crime. Marsy’s Law, as it is known, grants crime victims certain protections like the right to limit disclosure of information, the right to restitution, and the right to be notified of all court proceedings and changes in suspect incarceration status. If a victim chooses to invoke their Marsy Rights, the Records Division assists the local prosecutors and judges in ensuring the provisions within Marsy’s Law are followed. For more information about Marsy’s Law, visit the ND Attorney General’s website by clicking the Marsy Law logo to the left.

Comments and questions regarding the Records Division can be directed to the administrative clerk at: